It’s probably no surprise that the first days of 2021 were crazier for Australia’s leading motorsport category than the whole of the previous year, and for one team even more so…By Liz Swanton

For Todd Kelly, the start of a new year of Supercar racing seems like a holiday after a busy between seasons break that included signing a new driver—and a new business partner.

Normally Christmas ‘holidays’ are all about engines and aero kits—and there was plenty of both—but there were even bigger issues keeping the team owner and director of family-owned Kelly Racing working hard. 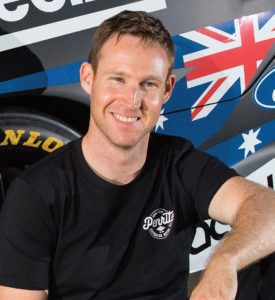 For starters, there was finding a replacement for Todd’s brother Rick, who retired from full-time racing last year. Many of those on Todd’s wish list already had commitments.

“We did a lot of thinking about what we needed,” Todd says. “It’s a huge list that includes how they will work with sponsors and how they’re perceived by the fans and the industry in general.

“David Reynolds ticks every box that we needed ticked, and it was the perfect timing. He only got out of his agreement with his previous team (Erebus Motorsport) very late last year, and that was a big move for us to try and get a replacement for Rick of that calibre.”

Todd describes Reynolds as a fantastic asset for the team, because he can hit the ground running. His highly respected engineer, Alistair McVean, has also signed on.

“We’ve had a really good look at our strengths and weaknesses since they joined, and Al has a pretty good handle on what we can do to improve the cars. So not only will Dave be able to get results, but having him and Al here will also help Andre [junior driver Andre Heimgartner]. Andre is at a really good point in his career and Dave will help bring him on. The real benefit for the team is that they have similar driving styles which should help fast track our development of the [Ford] Mustang.”

The relationship with Ford didn’t start until around Bathurst 2019, which meant the Christmas break that year was also hectic as the team switched to a completely different car to the Nissans they had campaigned for, for so long.

“The promising thing was, even though it was our fi rst year and we had a lot to learn, we were quite competitive at Tailem Bend (SA), Eastern Creek (NSW) and Bathurst and they are all high-speed circuits,” Todd says. “Once we had time to decipher the data, we found a significant weakness in any slow speed corner.

“We had a pole position and a couple of podiums in our first year, so there’s no reason not to repeat that on the high-speed tracks and aim for similar results on the lower-speed tracks. So we’re aiming for podiums and top fives everywhere we go.”

At the same time the search was on for a replacement driver, other stuff was happening behind the scenes: the addition of another name to the business, with an associated input of money and management skills.

Late last year, the Kelly family crossed paths with Stephen and Brenton Grove, who are not only in the same line of business as the Kelly family but also share their passion for motorsport.

“Stephen is a keen competitor, and a builder and developer,” Todd says. “Our family are builders. That’s how I started when I left school, before I got the opportunity to join the Holden Young Lions and race full-time.

“Mum and dad are still in the business and we actually built our whole new facility. Grove Group is almost a replica of what we do but on a much larger scale.”

Todd says it has been evident for some time that the team needed more ‘fire power’ because their competitors have multiple shareholders and investors. Whenever new drivers or technical staff were needed, the opposition had a financial advantage over the ‘family firm’.

“We’d only just finalised the new partnership when we had to find a chunk of money to hire a new driver,” he chuckles, “and Stephen was instrumental in making that happen.”

Stephen Grove has been made chairman of what is now known as Kelly Grove Racing. The logistics of the rebranding consumed much of the summer break.

“It’s a big job,” Todd says. “All the internal doors have a plaque on them such as ‘boardroom’ or ‘chief mechanic’ or whatever, with names where appropriate plus the team logo, so that all had to be changed.

“We’re probably talking around 200-300 different signs that had to be replaced as well as all the digital changes, merchandise and uniforms. There was not much time to make it happen between signing the deal and the start of the season.” 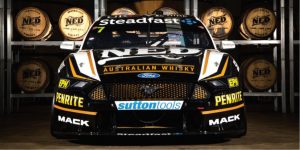 Aside from the physical challenge of the changes, one reason Todd is delighted with the Grove Group connection is that it lines up with the team’s long held preference for alliances with all-Australian brands. The naming rights sponsors for both cars are two examples, as is the relationship with local manufacturer, Sutton Tools.

“They make a huge range of tools that are up against the big global names and I am really proud that we have that tie-up. It’s important to us to do as much as we can for Australian manufacturing which I am very passionate about.”

“Kelly Grove Racing fabricates and machines most of their race car components in-house. With that comes a high level of craftsmanship and strict time frames for building and servicing them. It makes the perfect partnership for us to support them with our specialised tooling packages. We wish them a safe and successful year of racing.”