The rise of female tradies

Although numbers are reportedly up for female tradies in construction and mining, there’s a lot more to be done to connect the dots with industry and women workers. By Rachel Smith

Seeing female workers on the tools is becoming more commonplace, and industry experts say that’s a great thing. But although women’s participation in trades and technical occupations has increased from 10-15 per cent in NSW between 1987-2012, it’s not the full picture.

“Saying the numbers are climbing might be true but those figures include architecture, project management, engineering and admin,” says Dr Donna Bridges, who’s working on an ongoing research project at Charles Sturt University on women in manual trades. “When you actually break it down and look at women in the skilled trades like carpentry and electrical, that workforce is still only 1-3 per cent. It hasn’t changed in 30 years.”

WHAT’S WORKING AND WHAT’S NOT

Apprenticeship networks say the skill shortage in Australia remains a challenge—and that demand is there for more women to adopt careers in trade industries. However, steering female students towards those pathways is tough.

“Young women make absolutely brilliant tradespeople,” says Kris McCue, CEO at DGT Employment and Training, “but there’s still a perception among some people that jobs in trades like construction or mining is a boys only option.” And female students who have good grades are often talked into going to uni instead of doing a trade, adds Dr Bridges. “There’s also this perception in schools that students who aren’t doing well can ‘just get a trade’ but that’s actually not true. Do you want a carpenter working on your house who can’t do maths? You’ve got to be quite bright to do a trade and our research shows that employers who do hire women are really happy—their female tradies are focused, they don’t muck around, they get the job done. It’s not just men who can put a nail in a wall or fix a car.”

WHY A CULTURE CHANGE IS NEEDED

Diversity targets mean many large blue-chip companies are crying out for more women on the tools, but this isn’t always the case with smaller employers, says Colin McCabe, general manager at MEGT. “Large companies have sophisticated candidate attraction strategies,” he explains, “but your local plumber—who may be happy to take on a female apprentice—may be apprehensive about how to go about it and probably wouldn’t be getting any female applicants.”

And although there are many female tradies who are thriving, lots aren’t getting in, says Dr Bridges—and if they are, they’re dropping out because in some areas of construction, the culture contains a level of bullying or sexism and this is an impediment.

“During industry consultations it has come up that some men want the freedom to talk about sex at work or refer to women colleagues sexually,” says Dr Bridges. “Women not liking this can be seen as an issue. In most workplaces this is considered inappropriate. I do think that some areas of the construction industry need to get with the program on how people should behave at work.”

Peak groups like Women in Construction are doing good work, says McCue; “They’re actively helping businesses come up with ways to engage young women and promoting the benefits of employing them. Try a Trade is also a good way for young girls to get a sense of what’s involved in a job. And there has to be that messaging that engages young women as well as young men.”

Dr Bridges agrees and says that while government wants women in these roles, any initiatives driving change aren’t integrated. “They’re missing something. There needs to be social and traditional media campaigns similar to the Australian Defence Force; their marketing shows young women doing these jobs and that becomes attractive to young people. We need to talk to small businesses and find out how we can support them in hiring females, too.”

Ultimately, the demand is there, says McCabe. “The challenge is to encourage smaller employers to get on board and realise the amazing benefits to hiring women, and to let young women know about the opportunities that are out there, many of which have lucrative salaries. If you complete your apprenticeship and have a trade, you can be set for life.” 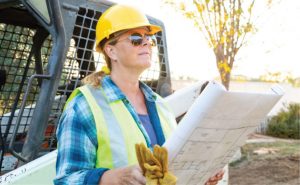 “After high school, I went to uni, got a degree in business management and ended up working in finance. But I wasn’t happy. I’d always fantasised about doing more of a physical hands-on role, and when I was 24, the department I worked for was made redundant, and I used that opportunity to go back to study. I’m now in my final year of a four-year apprenticeship as a heavy diesel fitter, working fly-in-fly-out on a BHP mine site.

It has had its challenges and can be exhausting at times, but the sense of accomplishment and fulfilment is huge, and I know there is a potential to be able to make a comfortable life for myself when I finish my apprenticeship.

“Being in a pure male dominated environment has been a mixed bag. However, during this experience I’ve grown a lot and have built a great deal of confidence and independence, and I feel like I can achieve anything. That sounds clichéd, but it’s true. I will say it’s taken a while for some workers to respect and understand having women in this environment. Nothing changes overnight. It’s a

process. I think it’s fantastic that there’s more of a trend for women getting into non-traditional manual trades—I never took that route when I was out of school because it didn’t even occur to me it was an option.

I’m proud of being a part of something that hopefully no longer will seem so different, as it becomes more common, but we still have a long way to go.”—Quuystn Lu, 28, heavy diesel fitter