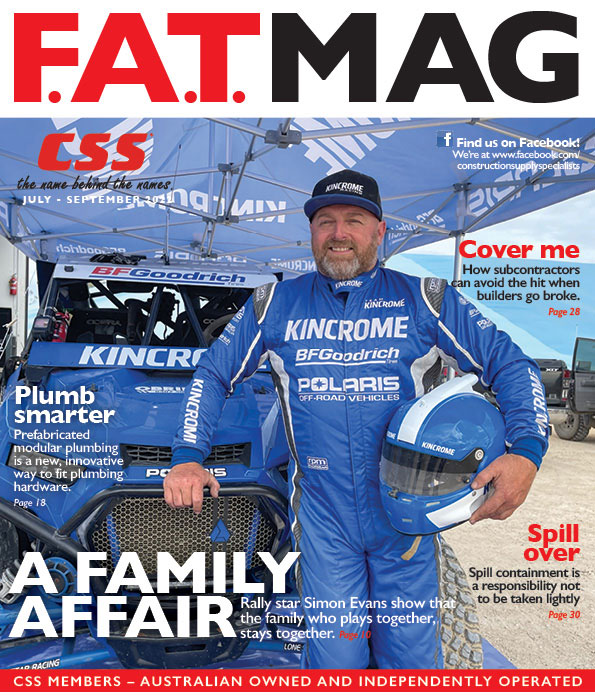 First of May, 2022 was the official 20th anniversary of the CSS Group so we have been up and about and quietly celebrating this significant milestone. It has been a hectic 20 years that has seen the group, and most of its members and listed suppliers, enjoy sustained growth through developing meaningful partnerships with each other. It has been a very good journey to this point.
At the time of writing this intro note, the CSS Group has 74 sensational members, who between them have 107 branches around the country. We have 134 listed supplier partners who work closely with us to make sure all CSS members can supply their customers with quality products, at competitive prices, as and when they are required.
I can also tell you that, as this article is being written, we are in negotiation with several potential new members who are finding out about the advantages of joining the CSS team and becoming part of our continuing success story that permeates the Construction, Industrial, Engineering, Mining, Infrastructure and Agricultural market segments throughout Australia.
It is still astonishing to me that a little over 20 years ago, an idea was hatched on a beach in southern New South Wales that has ended up as an enterprise that helps look after the industry position of so many independently owned and operated industrial supply house operations.
While the four foundation members have moved on as a result of acquisition by larger entities, CSS is a thriving concern, made up of hardworking, smart thinking, small business entrepreneurs who deliver great product, service and support to so many trades people across the country. From Darwin to Hobart, Port Hedland to Newcastle and all points in between, there is a CSS member not too far away—or at least in a position to be able to help you with your requirements.

A few interesting facts from 2002 …
● Apple released its second-generation IPod, with a whopping 20GB of storage space. (Exceptional!)
● The Sanyo SCP-5300 became the first ever mobile phone to have a built-in camera in it. (Privacy gone.)
● Ben Affleck named People’s Sexiest Man Alive. (Miracles do happen.)
●The Osbournes premiered on MTV (What was that all about?)
● CSS was officially launched on 1 May, 2002 and operated from a single, residential garage in outer Melbourne.
Now, in amongst that lot, there are a couple of reasons why the world might never be the same again.
Anyway, Happy Birthday to CSS and congratulations on turning 20.
Thank you all for your support of the F.A.T. Mag and for supporting the CSS member you received this issue from.
As we have said many times before, small business in Australia amounts to big business when you put it all together and this country would be lost without it.
The current 74 members of CSS have a collective turnover that some corporates would be envious of. They employ hundreds of people, contribute to their local communities, and offer good old fashioned service, support and fellowship to all of their customers and this is probably a key reason why you support them. We salute you for that.

Here’s hoping that the best of your last 12 months will be the worst that you can expect going forward and our run through to Christmas is just sensational. (Sorry to do that, but it will be here quick enough!!)